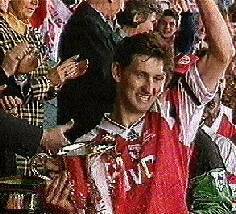 . Frankly, I spent weeks reading Arsenal history books, watching Arsenal videos and listening to Arsenal tapes to bring this to you, so I'm adding my little © symbol to it ok! Please do not copy, distribute or reproduce this history without my permission.